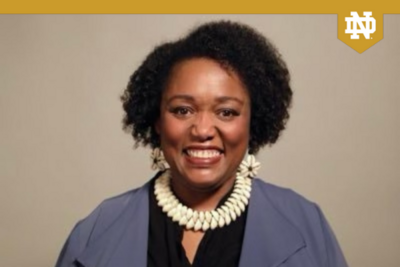 Notre Dame, IN — The Notre Dame Office of Life and Human Dignity (NDOLHD) at the McGrath Institute for Church Life is excited to welcome Gloria Purvis as its inaugural Pastoral Fellow, a new role designed to enhance the impact of pastoral leaders in life of the Church, particularly around timely and pressing issues like racial justice.

Purvis will partner with NDOLHD through July 2022 to enact a truly Catholic response to the sin of racism. This will include developing resources for the Teaching Human Dignity series, a free collection of lesson plans and other teaching materials for use in the classroom; creating an online course addressing the theology of racial justice to be offered through the McGrath Institute; offering two campus events for Notre Dame and the local community; and facilitating a workshop series for pastoral leaders with the goal of equipping them for dialogue and engagement on issues of racial justice.

“The murder of George Floyd reawakened the painful fact that our nation still does not treat its Black citizens as human beings endowed with inalienable dignity,” said Jessica Keating, program director of the Notre Dame Office of Life and Human Dignity. “We felt called to respond to the sin of racism in our spring 2021 webinar series, Conversations That Matter, in which Gloria Purvis participated. After the series concluded we were convinced that there remained much to be done to address this issue. The scourge of racism, which distorts and disfigures our shared humanity in ways that are both painfully visible, but also in ways that are more subtle, hidden, and thus often unacknowledged. Few Catholics have spoken as honestly and poignantly about racism as Gloria Purvis. She is among the most prominent, and dare I say, prophetic voices, lamenting the sin of racism, and calling all of us to deeper conversion and commitment to solidarity. It is our hope that our collaboration with Ms. Purvis on a number of key initiatives can help to build a culture of solidarity that recognizes, protects, and promotes the flourishing of every human person.”

Gloria Purvis is a graduate of Cornell University and worked for nearly two decades in the mortgage industry before becoming a risk management director at a major financial services company. She served on the National Black Catholic Congress' Leadership Commission on Social Justice, and as an Advisory Board Member on the Maryland Catholic Conference's Respect for Life Department as well as the Archdiocese of Washington's Pastoral Council. She taught Natural Family Planning and helped prepare engaged couples for marriage as a member of a Pre-Cana team in the Archdiocese of Washington. She has appeared in various media outlets including The New York Times, The Washington Post, PBS Newshour, Catholic Answers Live, and EWTN News Nightly, and hosted Morning Glory, an international radio show. She is Our Sunday Visitor’s Catholic of the Year for 2020.

Currently, she is a full-time stay-at-home mother and a consultant for the U.S. Conference of Catholic Bishops' Committee on Religious Liberty. Gloria is the creator and host of the EWTN TV series, Authentically Free at Last, that deals with the modern challenges to the expression and understanding of authentic human freedom. For the past 6 months, Gloria has been collaborating with America Media on "The Gloria Purvis Podcast" which has provided important commentary on the life of the Catholic Church in the United States. She is dedicated to promoting the sanctity of human life, marriage, and the dignity of the human person.

To learn more about the Notre Dame Office of Life and Human Dignity visit mcgrath.nd.edu/life.