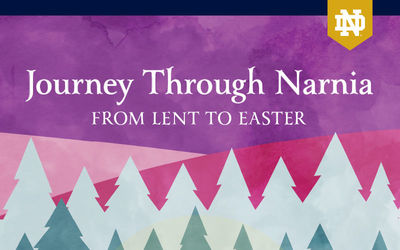 A beloved series of books about an imagined world will open the door to deeper experiences of real-life conversion when the University of Notre Dame’s McGrath Institute for Church Life sponsors a series of lectures titled, “The Chronicles of Narnia: A Spiritual Journey through Narnia from Lent to Easter.”

Four evening events, hosted free of charge for the general public between March 5 and April 23, will feature scholars’ discussions of the seven Narnia volumes written for children by the 20th century Christian intellectual C.S. Lewis.

The McGrath Institute’s series is intended to accompany Notre Dame students and audiences of all ages as they read (or re-read) Lewis’ classic stories. This “communal” exploration, following the order in which the books were published, will “help people to engage in them and find some fruit—spiritually, theologically and literarily—that they might not have found by themselves,” said Leonard J. DeLorenzo, Ph.D., the Institute’s Director of Undergraduate Studies.

He developed the program and a parallel course for in-depth study. Students interested in the one-credit course should contact the Department of Theology promptly to enroll.

Lewis’ vision of a mystical land rich in Christian allegory yields “dramatic narratives of conversion” that can be read and discussed at a comfortable pace between Ash Wednesday and Pentecost, the end of the Easter season, DeLorenzo said. Neither the Chronicles nor the upcoming lectures are didactic Lenten teachings, but they provide opportunities for “being reawakened to truth and reality and to a recalibration of the senses and the affections: That is all the business of Lent.”

DeLorenzo also noted the order in which the volumes will be discussed, starting with The Lion, the Witch and the Wardrobe published in 1950. Presentations will follow the order of their publication rather than the chronology of Lewis’ overall narrative arc. An experience of moving backward and forward in time occurs in much of literature and life, including Catholic liturgy, he said. “Recalling and remembrance of the past helps to understand a present moment, and an act of memory allows that history to become present.”

The tales of characters discovering courage, bravery, belief and redemptive love in Narnia have inspired countless young readers. Adults willing to revisit that land’s wonders “learn how to see the divine drama in this world more clearly and to embrace it like children would,” DeLorenzo said. “You actually come to love that world” and realize “we don’t love our world enough.”

The Institute’s program, continuing an annual tradition of special Lenten activities, will present two lectures on each evening, March 5, 19 and April 9, 23, at the Eck Visitors Center. Speakers will include Notre Dame professors of theology and philosophy, as well as scholars from other universities. On each evening, the first lecture will begin at 6 p.m. and the second at 7:15 p.m.