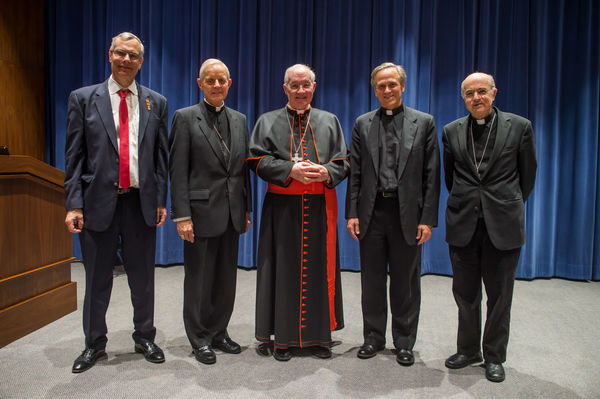 This past week, February 12-14, 2014, the Institute for Church Life at the University of Notre Dame, in collaboration with the United States Conference of Catholic Bishops Committee on Doctrine, sponsored a symposium for Bishops from across the United States and their delegates. The fifth in a series of biennially co-sponsored conferences between the Institute for Church Life, and the Committee on Doctrine of the USCCB, the symposium, titled Pastoral Issues in Science and Human Dignity, aimed to help bishops and their diocesan educational officials explore some of the fundamental theoretical issues in the relationship between science and religion, and some of the practical issues that flow from the interaction between science and religion.

“We developed this conference to help pastors of the Church address issues arising at the intersection of science and human dignity, mainly stemming from the profound and corrosive impact that the so-called new atheism has had on our youth and young adults and their relationship to their faith, but also on the ways in which a certain kind of scientific reductionism affects bioethics in the public sphere,” offered Professor John C. Cavadini, McGrath-Cavadini Director of the Institute for Church Life, Professor in the Department of Theology and symposium organizer.

The Keynote address was given by his Eminence Marc Cardinal Ouellet, Prefect of the Congregation for Bishops and was titled “Bridging Science and Faith: Strengthening the Sense of Human Dignity Today”. In concluding his talk, Cardinal Ouellet said, “Educating our young people to see further than the stars and deeper than the internet is the great challenge of today’s educators, who must form men and women free of scientistic and fundamentalistic prejudices, capable of promoting the dignity of the human person in the name of faith and reason.”

His Eminence Donald Cardinal Wuerl, Archbishop of Washington, D.C. also addressed the symposium participants adding, “This evening I simply want to express a word of appreciation to Notre Dame University, to Father John Jenkins, the President of the University, and to the Institute for Church Life, to Dr. John Cavadini, its director, and to all of you from so many disciplines and of course to the bishops in significant number who are here simply to participate in this activity of dialogue, discernment and conversation to help shed the light of our great Catholic received tradition on the issues and challenges of our day.”