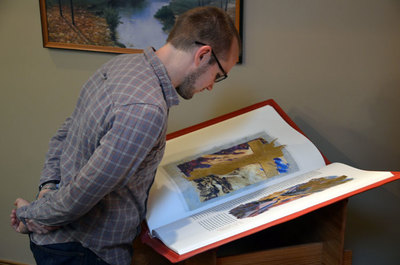 A musical performance featuring the illuminated images of a handwritten Bible will be held at the University of Notre Dame on Sept. 24 at 2 p.m. Sacred art from The Saint John’s Bible will be projected on a large screen in Leighton Concert Hall at the DeBartolo Performing Arts Center during a unique vocal and instrumental concert that draws the audience into a meditation on Holy Scripture.

“Illuminating the Incarnation: A Musical Meditation on The Saint John’s Bible” will feature a 10-voice schola, two violinists and a keyboardist. Additionally, dance and Scriptural proclamations will accompany the display of illustrations from the Bible. Concert attendees will sit onstage with the performers to mimic salon-style concerts of the 19th century where musicians played for their audiences in living rooms.

The event will begin with a short presentation on the history and production of The Saint John’s Bible.

“Combining the imagery of the Saint John’s Bible with musical performance invites us into a deeper appreciation of the Incarnation when the Word became flesh,” said John Cavadini, McGrath-Cavadini Director of the McGrath Institute for Church Life. “Pope Francis has said that art is a wonderful tool for evangelization because it engages the senses in ways that stir the human heart.”

The seven volumes of The Saint John’s Bible Heritage Edition will be on display at the performing arts center for attendees to view. Calligrapher Donald Jackson, who spoke at Notre Dame in October, collaborated with Benedictine monks at Saint John’s Abbey and University in Collegeville, Minnesota and numerous scribes and artists to produce the manuscript.

Carmen-Helena Téllez, professor of conducting in the Department of Music; Tim O’Malley, managing director of the McGrath Institute for Church Life; and Carolyn Pirtle, associate director of the Notre Dame Center for Liturgy are producers and artistic directors for the concert. Téllez is also the musical director. Sean Martin of the DeBartolo Performing Arts Center will co-produce.

Tickets cost $5 and can be purchased at performingarts.nd.edu. Seating is limited to preserve the intimate setting for the concert.

The McGrath Institute for Church Life at Notre Dame partners with Catholic dioceses, parishes and schools to address pastoral challenges with theological depth and rigor. By connecting the Catholic intellectual life at Notre Dame to the life of the Church, the McGrath Institute for Church Life forms faithful Catholic leaders for service to the Church and the world. Visit icl.nd.edu.

Originally published by Meg Mirshak at icl.nd.edu on August 24, 2017.