Science and Faith: The Myth of Conflict 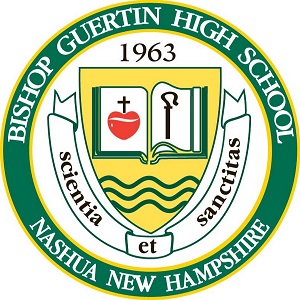 The McGrath Institute for Church Life at the University of Notre Dame and Bishop Guertin High School invite teachers to a 1-day workshop where participants will gain valuable insights for teaching at the interface of science and religion. 6 professional development hours are offered.

Stephen Barr - Plenary Keynote 1: "The Catholic Church and Science: Overcoming the Myth of Conflict," Many have claimed that modern science and Christian faith have been opposed historically, philosophically, and in what they say about the physical world. Prof. Barr will show the reverse to be true.

Chris Baglow - Plenary Keynote 2: "A Wisdom Wider than Science: The Christian Doctrine of Creation," “I believe in one God, the Father Almighty, Creator of heaven and earth…” All Catholics profess these words every Sunday but often are not aware of the way that Church has taught us to understand them. In light of evolutionary theory and the advances of biology, do we still believe in divine creation? In this talk, Chris will demonstrate that, contrary to New Atheist propaganda, the Church’s teaching remains as relevant today as always.

Cory Hayes: “Modern Science, the Catholic Church, and the Galileo Affair” (History)
Beginning with Copernicus and ending with St. John Paul II, Dr. Cory Hayes will examine the trials of Galileo, the major players involved and the issues that were at play in his 1633 condemnation by the Inquisition for the sake of overcoming misconceptions and deepening our understanding of the lessons it has for us today.

Carolyn Pirtle: "The Good, the True, the Beautiful: Faith, Science, and Art in The Saint John's Bible" (Fine Arts)
How can art help to heal? In its stunning illuminations that incorporate scientific and theological imagery side-by-side, The Saint John's Bible bridges the perceived rift between faith and reason, inviting 21st-century viewers to a greater understanding of the deep harmonization between science and religion.

Chris Baglow: "Science and the Bible: Understanding the Catholic Approach" (Theology)
Much of the confusion about science and religion stems from the assumption that the Bible has already answered major scientific questions about the universe to which actual science offers rival answers.To address this misconception, Chris will explain the Catholic approach to biblical truth and its relation to scientific discovery.

Christian Bobak: "Athletics, Coaching, and Christian Formation" (Athletics)
What are the best practices of coaching? How do we define success and winning? And why is athletic training and competition an integral part of Catholic education? In this session Christian Bobak, Franciscan University’s all-time winningest soccer coach discusses the intersection of coaching and Christian formation, offering principles that serve excellence and virtue formation in student athletes both on and off the field.

Dan Kuebler: "Creation and Evolution, Chance and Purpose: A Catholic Perspective" (Biology)
For some, the scientific theory of evolution is seen as incompatible with a God who has knowingly and purposely fashioned us. However, if one examines the science of evolution properly, the theory can reveal the order inherent in creation. As Pope Benedict has stated, creation and evolution represent “two complementary—rather than mutually exclusive—realities.”

Stephen Barr: "Fearful Symmetries" (Physics, Chemistry, Mathematics)
One of the most ancient and traditional arguments for the existence of God is based on the order found in the cosmos and the lawfulness of nature. Prof. Barr will trace this argument from Scripture, through the theologians of the early Church, up to our own day, examining  the question from the perspective of modern science.

Through the generous support of the John Templeton Foundation, Bishop Guertin High School, and the McGrath Institute for Church Life at the University of Notre Dame, this Institute Day is FREE of charge for teachers who register by February 28, 2020.

REGISTER FOR THE INSTITUTE DAY

At 7:00 pm on Thursday, March 5, there will be a free event in Bishop Guertin High School's Collignon Gymnasium open to the community. Dr. Chris Baglow, Director of the McGrath Institute for Church Life Science & Religion Initiative at the University of Notre Dame will present From Cosmos to Curriculum: Faith and Science in Catholic Education. He will investigate the Church's definition of a Catholic school as a "synthesis of faith and culture, reached by integrating all of human knowledge... in the light of the Gospel" as an answer to the rise of unbelief among young Catholics. He will conclude by introducing the dialogue between faith and science proposed by St. John Paul II as a key element of Catholic identity and student formation in secondary education. This event is FREE, but registration is required.

Prof. Stephen Barr teaches physics and astronomy at the University of Delaware. In addition to his research, Dr. Stephen M. Barr has also written and lectured extensively on the relationship between science and religion. He was awarded the Benemerenti Medal in 2007 for service to the Church and elected to the Academy of Catholic Theology in 2010. He is the founder and President of the Society of Catholic Scientists and the author of Modern Physics and Ancient Faith (2003), A Student's Guide to Natural Science (2006) and The Believing Scientist: Essays on Science and Religion (2016).

Director of the Science and Religion Initiative McGrath Institute for Church Life, University of Notre Dame

Chris Baglow is Director of the Science and Religion Initiative of the McGrath Institute for Church Life of the University of Notre Dame. Since 2005 he has been a leader in the integration of faith and science in Catholic schools, including national week-long summer seminars for Catholic high school science and religion teachers such as the Steno Learning Program in Science and Religion (2011-2014) and Foundations New Orleans. Baglow is the author of the high-school religion textbook Faith, Science and Reason: Theology on the Cutting Edge (Midwest Theological Forum, 2nd edition, 2019).

Christian Bobak is the current and all-time winningest head men’s soccer coach at Franciscan University of Steubenville. Bobak played for Franciscan from 2007-2010 while serving as team captain in the Barons first years of NCAA competition. Prior to returning to the Barons, Bobak taught theology and was the head soccer coach at St. Paul’s High School in Covington until 2015. During his tenure, St. Paul’s won three state championships and was ranked number one in the nation for the 2014-15 season in the national coaches’ poll. Christian, his wife Christyn, and their new baby boy Kolbe reside in Pittsburgh, PA.

Prof. Cory Hayes is a professor of Philosophy and Theology at St. Joseph Seminary College in Covington, LA.  He holds a Ph.D. in Systematic Theology from Duquesne University in Pittsburgh, PA. He has also pursued studies at the Gregorian and Angelicum universities in Rome, Italy.  He and his wife Jennifer have been married for 16 years, and they have 7 children whom they homeschool.

His research and teaching interests include Byzantine and Eastern Christian theology, philosophy of nature, and the relation between theology, philosophy, and empirical science.  He is a facilitator at Foundations New Orleans, a week-long seminar program for Catholic science and theology teachers sponsored by the McGrath Institute for Church Life at the University of Notre Dame.

Dr. Kuebler is a Professor of Biology and Chair of the Biology Department at Franciscan University in Steubenville, Ohio where he teaches courses on evolution, cell physiology, and neurobiology, as well as maintaining an undergraduate research laboratory that investigates seizure disorders. He is the co-author of The Evolution Controversy: A Survey of Competing Theories (Baker Academic, 2007), a resource for cutting through the competing agendas to gain an unbiased understanding of the scientific issues involved in the debate surrounding evolution.

Dr. Martin is assistant professor of Theology and Liberal Studies (Great Books) at the University of Notre Dame with areas of research interest in 19th and 20th century Roman Catholic and Eastern Orthodox systematic theology, trinitarian theology, theological aesthetics, religion and literature, ressourcement theology, and the nature of religious tradition. Her first book, Hans Urs von Balthasar and the Critical Appropriation of Russian Religious Thought (University of Notre Dame Press, 2015) was one of 10 winners internationally of the 2017 Manfred Lautenschlaeger Award for Theological Promise (formerly the John Templeton Award for Theological Promise). She is also the co-editor of An Apocalypse of Love: Essays in Honor of Cyril O’ Regan (Herder & Herder, 2018). Other work has appeared in Modern Theology, Communio: International Catholic Review, and in a number of edited volumes and collections of essays.

Ms. Pirtle is the Program Director of the Notre Dame Center for Liturgy in the McGrath Institute for Church Life. She is also Managing Editor of the McGrath Institute Blog, where she writes about liturgical music, aesthetics, devotional practice, and popular culture. Carolyn is an award-winning composer of liturgical music (available through World Library Publications and earthsongs), and author of "Praying the Rosary Together: A Guide for Home and Classroom" (World Library Publications, 2019).