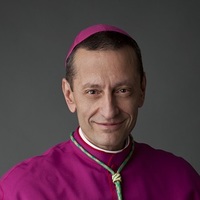 The Most Reverend Frank J. Caggiano was installed as Fifth Bishop of Bridgeport on Thursday, September 19, 2013 at St. Theresa Church in Trumbull.

On February 22, 2014, he formally convoked the 4th Synod of the Diocese of Bridgeport, the first in 32 years, as an opportunity for reform and renewal by empowering the young Church, building up communities of faith, fostering evangelical outreach, and promoting works of charity and justice. More than 8,000 faithful turned out to celebrate that vision at the Synod Closing Mass Celebration at Webster Bank Arena on September 19, 2015.

Under his leadership the diocese has launched the Diocesan Leadership Institute, ongoing Strategic and Pastoral Planning, three major Foundations to support works of charity, faith, and education, an innovative social media outreach program, and other initiatives to renew the spiritual, liturgical and pastoral life of the diocese.

He presently serves on four committees of the United States Conference of Catholic Bishops (USCCB): Committee on Evangelization and Catechesis; Subcommittee on the Catechism; Orthodox Union Catholic Dialogue; Committee on Laity, Marriage, Family Life and Youth.

On July 28, 2019, he was one of five American bishops elected by the U.S. Conference of Catholic Bishops (USCCB) to represent the United States at the XV Ordinary General Assembly: Young People, the Faith, and Vocational Discernment held in October at the Vatican.