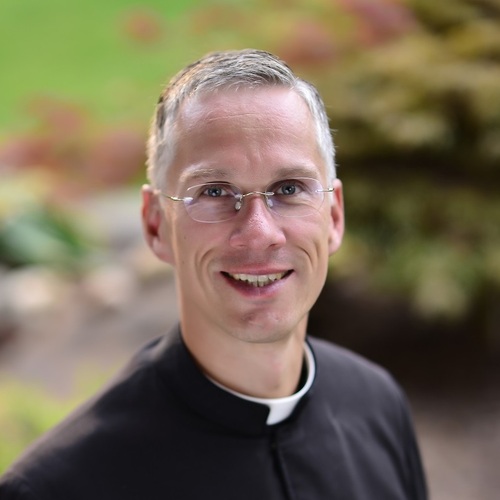 Fr. Andreas Kramarz is spending an academic sabbatical researching at the McGrath Institute for Church Life on the philosophical and theological foundations of “integral formation” as part of an interdisciplinary post-doctoral fellowship granted by the Pontifical Athenaeum Regina Apostolorum, Rome/Italy.

Born in Düsseldorf, Germany, he spent all his school years in Aachen and graduated in Catholic Theology and German Language and Literature at the Westfälische Wilhelms Universität Münster. For two semesters, he participated in the Theological Year of Studies at the Dormition Abbey in Jerusalem, Israel. From 1993 to 1994, he worked as an assistant nurse at the hospice Haus Hörn in Aachen, Germany.

After joining the German novitiate of the Legionaries of Christ, he studied classical humanities for one year in Salamanca, Spain, and completed a Licentiate in Philosophy at the Pontifical Regina Apostolorum College in Rome, Italy. Since 1999, he taught courses in Latin, Greek, History, Art, and Music at the Legion of Christ College of Humanities in Cheshire, CT. A priest since 2003, Fr. Andreas served as Dean of Studies at the College from 2009 to 2019 and is spiritual director and confessor at the Legionary seminary.

In 2013, he earned a Ph.D. in Classical Civilization at the Classics Department of the University of Florida and published with Peter Lang the volume The Power and Value of Music: Its Effect and Ethos in Classical Authors and Contemporary Music Theory.

Until the summer of 2021, Fr Andreas has been teaching Western Civilization, Music Theory and History, an elective on Currents of Contemporary Culture, and Chant. In addition, he has been serving as spiritual director, confessor, and choir director for the seminary and as a chaplain for Regnum Christi members in Upstate New York. He is a member of the Society of Classical Studies, the International Society for the Study of Greek and Roman Music and Its Cultural Heritage (MOISA), and the Society for Christian Scholarship in Music.

Apart from his priestly and academic assignments, Fr. Andreas has been active as a choir director, organist, and pianist. He enjoys mountain hiking, classical music concerts, art museums, but especially inspiring conversations with others.