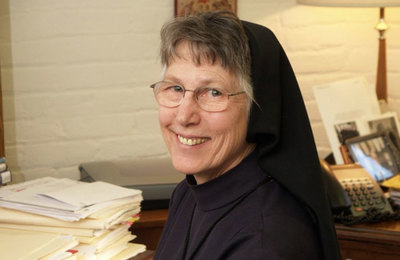 Sister Mary Prudence Allen, R.S.M., Ph.D., a Catholic philosopher whose works focuses on the philosophical concept of woman will deliver the sixth annual Human Dignity Lecture on Tuesday, October 24 at 7 p.m. in the Eck Visitors Center auditorium. The lecture, “The Dignity of Human Gender,” is sponsored by the McGrath Institute for Church Life and the Office of Human Dignity and Life Initiatives at the University of Notre Dame.

Sister Allen is a member of the Religious Sisters of Mercy of Alma, Michigan. She is the author of the three-volume magnum opus, The Concept of Woman, which traces the philosophical concept of woman from the pre-Socratics to modernity. Pope Francis appointed Sister Allen among the 40 philosophers and theologians named to the International Theological Commission in 2014.

“Sister Prudence Allen’s magisterial work, The Concept of Woman, gives us clarity and insight into the philosophical development of gender theory,” said John Cavadini, McGrath-Cavadini Director of the McGrath Institute for Church Life. “This scholarly work has tremendous value for anyone interested in feminism, gender, and human dignity in our modern times.”

The annual lecture invites a prominent figure to campus to advance the conversation on human dignity. Past lecturers include Gustavo Gutierrez, O.P.; Most Reverend Timothy Cardinal Dolan, Archbishop of New York; and Most Rev. John Cardinal Onaiyekan, Archbishop of Abuja, Nigeria.

The lecture is part of the Notre Dame Human Dignity Project which strives to develop a pedagogy of human dignity that is accessible to persons of all faiths or no faiths. Additionally, the project encourages the Notre Dame community to recognize their own human dignity and that of others.

The lecture is free and open to the public. A reception will follow.

The McGrath Institute for Church Life at Notre Dame partners with Catholic dioceses, parishes and schools to address pastoral challenges with theological depth and rigor. By connecting the Catholic intellectual life at Notre Dame to the life of the Church, the McGrath Institute for Church Life forms faithful Catholic leaders for service to the Church and the world. Visit icl.nd.edu.

Originally published by Meg Mirshak at icl.nd.edu on October 11, 2017.