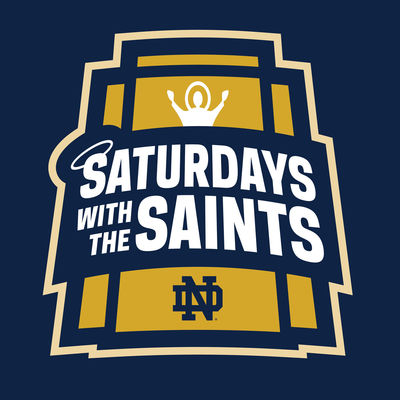 Saturdays with the Saints

Notre Dame, IN — The McGrath Institute for Church Life (MICL) is kicking off the tenth season of its game day lecture series, “Saturdays with the Saints,” on Saturday, September 14th. All talks take place on home game days at 10:30 a.m. in the Andrews Auditorium in Geddes Hall, and are free and open to the public.

John Cavadini, the McGrath-Cavadini director of the MICL, came up with the idea to host a series of lectures about the lives of the saints on the Saturday morning of home football games in 2010. Starting with three lectures in its first season, the Institute has welcomed 27 speakers from several departments on campus who have lectured on 41 different saints.

According to Cavadini, “The series was inspired by the fact that Saturday has great significance in the Christian tradition. It was the ancient Sabbath and is an image of eternity because it was on the seventh day that God rested, making our lecture series an image of eternity.”

Saints from a spectrum of backgrounds, many of them recognizable as people from the modern world, offer encouragement through “the beauty in their lives,” which is ultimately the “reflected light from faith in Christ, accessible to all,” said Cavadini. “It’s not a thought, it’s a life.”

This year’s theme is “Saints of the Blessed Sacrament.” The Eucharistic focus of this year’s series emphasizes that the Catholic Church’s call to holiness for all people is modeled especially well by canonized saints.

“In a way, all the saints are saints of the Blessed Sacrament because they’re all configured to the Paschal Mystery, to the sacrifice of Christ as self-gift,” Cavadini said. “That’s what the Eucharist makes present and forms us in.”

The Institute’s 2019 lecture series begins with Timothy P. O’Malley, Ph.D., the Institute’s Director of Education, discussing the saints—such as Linus, Cletus and Clement—mentioned in the Eucharistic Prayer at Mass. The complete schedule is available at mcgrath.nd.edu/saints.