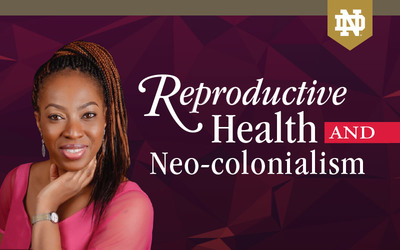 An internationally recognized expert opposing the neo-colonialist promotion of abortion in the developing world will deliver the 2019 Human Dignity Lecture sponsored by the University of Notre Dame’s McGrath Institute for Church Life on Tuesday, March 26.

Obianuju Ekeocha, a biomedical scientist, influential author and president of Culture of Life Africa, will speak on “The Primacy of Reproductive Health and Rights and the Rise of Ideological Neo-colonialism.” Her lecture will begin at 7 p.m. in the Eck Visitors Center.

Ekeocha travels widely as an advisor to governmental leaders, working to counter assaults on values tied to the dignity of human life, marriage, motherhood and families. She has addressed the United Nations on the extensive research found in her book, Target Africa: Ideological Neo-colonialism of the Twenty-First Century.

Born in Nigeria and now serving in the medical field in the United Kingdom, Ekeocha focuses on the internationalization of an abortion-rights ideology through which developed countries impose their stances on reproductive health and autonomy in countries in Africa and Latin America.

“As a researcher and human rights activist, Ekeocha offers a compelling case for the ideological neo-colonialism in developing nations occurring under the aegis of reproductive health,” said Jessica Keating, M. Div., program director of the Notre Dame Office of Life and Human Dignity.

That office, part of the McGrath Institute, hosts the annual Human Dignity Lecture. This year’s lecture is free and open to the public, with a reception to follow.

Culture of Life Africa was founded by Ekeocha to amplify African women’s pro-life perspectives. She has worked on statements and activities embodying those traditions with leaders in government and religion, including the bishops of various Catholic dioceses.