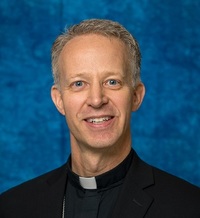 Bishop Wack was born and raised in South Bend, Indiana as the second-youngest of ten children. Although he is used to hearing his name pronounced in a variety of ways, he prefers the German pronunciation, which sounds like “wok” (think of the large, round frying pan).

His grade school days included attending Christ the King Grade School, followed by LaSalle (public) High School, after which he spent one year at Holy Cross College. He later graduated from the University of Notre Dame with a bachelor’s degree in 1989.

Bishop Wack entered formation in the college seminary with the Congregation of Holy Cross at Notre Dame, Indiana.  After graduation, he traveled to Cascade, Colorado to join the Holy Cross Novitiate for one year (1989-90), and professed first vows in Holy Cross at the conclusion of the Novitiate. He then returned to Notre Dame to pursue a Masters of Divinity degree, which he received in May 1993.

Following Ordination to the Priesthood (April 9, 1994), he served for three-and-a-half years as associate pastor at Sacred Heart Church in Colorado Springs, CO. From July 1997 to July 2002, Bishop Wack returned to Notre Dame as Associate Director of Vocations for Holy Cross. In addition, he served as Director of the Freshman Retreat Program at Notre Dame and worked in Campus Ministry.

An opportunity to reach out to those on the peripheries arose in 2002 when he became Director of André House, a House of Hospitality which serves the homeless and poor of Central Phoenix. He served there until 2008. In June 2009, he moved to Austin, TX to become pastor of St. Ignatius Martyr Parish in the Diocese of Austin, and later Dean of the Austin Central Deanery.

On May 29, 2017, His Holiness, Pope Francis, named Father Wack as the sixth bishop of the Diocese of Pensacola-Tallahassee. He was ordained and installed as bishop at the Pensacola Bay Center on August 22, 2017.