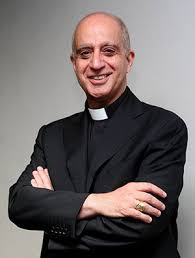 Born in Codogno in northern Italy on August 25, 1951, Salvatore "Rino" Fisichella was ordained a priest for the Diocese of Rome on March 13,1976 and became an auxiliary of the same diocese and Titular Bishop of Vicohabentia in 1988. He was appointed archbishop in 2008 after taking charge of the Academy for Life. In 2010, Pope Benedict XVI appointed him to the Pontifical Council for Promoting the New Evangelization. In 2013 he was appointed president of the International Council for Catechesis.

He is a specialist in the theology of Hans Urs von Balthasar, on whom he did extensive research in 1980. He taught fundamental theology at the Pontifical Gregorian University and the Pontifical Lateran University. He has served as a chaplain to the Italian parliament. He also served as an Auxiliary Bishop of Rome, Rector of the Pontifical Lateran University and in various curial positions. In 1994, he was appointed a Chaplain of his holiness. Archbishop Fisichella is also a member of the Vatican congregations for the Doctrine of the Faith and for the Causes of Saints.