In a landmark study on how everyday Americans think about abortion, the Notre Dame Office of Life and Human Dignity in partnership with sociologist Tricia Bruce, found that many Americans had never spoken about abortion before. Given the opportunity to reflect on the issue of abortion, it become clear that many knew little about the law and the development of the unborn child. In response to the need for information and a space to reflect on the realities surrounding the issue of abortion, the Notre Dame Office of Life and the Archdiocese of San Francisco are hosting a virtual three-part series on prenatal development, California abortion law, and the ethics of abortion.

This series is intended for a general audience. Each session will begin with a 45 minute talk, followed by time for Q&A.

"Fearfully and Wonderfully Made: Prenatal Development Through the Stages”

About the speaker: Catherine Short Esq., graduated from Thomas Aquinas College in 1980 with a B.A. in Liberal Arts. She received her Law degree from Boalt Hall, U.C. Berkeley, in 1983. In 1989, she participated in establishing Life Legal Defense Foundation, which she now serves as Vice President of Legal Affairs.

In her years with Life Legal, Ms. Short has written numerous briefs for state and federal courts, including petitions for certiorari and amicus briefs in the United States Supreme Court and California Supreme Court. She also co-authored the text of Proposition 73, Proposition 85, and Proposition 4, all of which were California ballot initiatives attempting to establish a law requiring parental notification before a minor can receive an abortion. She was counsel of record in  People’s Advocate v. ICOC (challenge to Proposition 71, California’s embryonic stem cell funding initiative),  Hoye v. Oakland (First Amendment challenge to restriction on speech outside abortion clinics), and  Pro-Life Mississippi v. Vance (seeking injunction against police harassment of pro-life sidewalk counselors).

"The Ethics of Abortions: Misconceptions and Challenges” 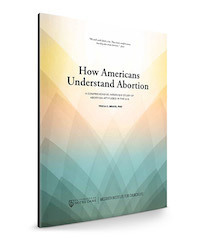 "How Americans Understand Abortion: A Comprehensive Interview Study of Abortion Attitudes in the U.S." is a landmark study and a must-read for anyone committed to understanding not only what Americans believe about abortion, but how they think about it.